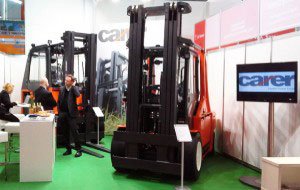 Last February Carer attended for the first time LogiMat, the International Trade Fair for Distribution, Materials Handling and Information Flow. Significant increases in all areas have made LogiMat 2015 the most successful intralogistics trade fair in history.

LogiMat 2015 came to a close with the best results in the history of the show. For the first time this year LogiMat took up seven of the eight halls at the Stuttgart exhibition centre; in terms of trade visitors, too, there was a rise of seven percent to more than 35,000 trade visitors coming to the Stuttgart exhibition centre on the three days of the show.

It was a record-breaking LogiMat: more than 21 percent of the exhibitors in Stuttgart came from outside Germany this year – that´s an increase in international participation of 17.1 percent. Among the 28 countries represented at the show, the highest in the rankings (after Germany) were the Netherlands, Italy, Switzerland, Austria and France. In addition more international exhibitors traveled to Stuttgart from overseas and Asia, in particular from China and the US, but also from Korea and Taiwan.

Carer has presented 2 brand new machines and scheduled many business meetings all over Europe, improving and expanding its worldwide markets.